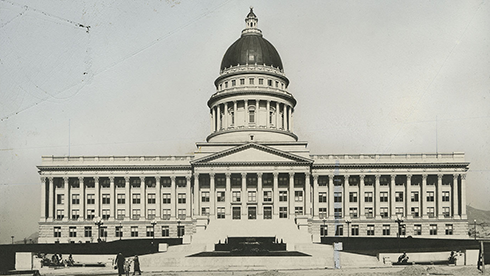 The Capitol Commission was created in 1909 when the Utah Legislature enacted four Capitol Building bills approved by Governor William Spry March 11, 1909. The commission was authorized, empowered, and directed to cause a suitable design, with plans and specifications, to be prepared for the erection of a State Capitol upon the Capitol grounds in Salt Lake City. The commission was charged to provide a design to meet the future requirements of the state, and to provide for growth as the necessities of the state may require.

Members of the commission were Governor William Spry, president of the commission; Secretary of State C.S. Tingey, vice-president; Attorney General A. R. Barnes; and four others appointed by the Governor: John Dern, C.E. Loose, M.S. Browning, and John Henry Smith.

These Reports (1913-1916) is an account of the monies used to build the State Capitol Complex. The report contains specific construction details and land procurement operations. The 1915-1916 edition includes more specific design expenditures and a small history of the construction. Pictures of various stages are also included.

Minutes (1909-1916) of the Utah Capitol Commission's formal meetings and a record of members present at meetings, outside consultants, expenses incurred by commission members, rules for the design competition, discussions about bids and the issuing of contracts, agreements for expenditures, and a list of the original cornerstone contents.

Newspaper clippings (1909-1917) reflect public relations efforts by the Capitol Commission and public opinion regarding the building of the state capitol. Collected by the Capitol Commission with the bulk of the series focusing on articles addressing the design competition for the capitol building, arguments for and against construction, location issues, calls for voter participation, messages from Governor Spry, and highlights from the construction process such as the laying of the cornerstone.

Architects who wished to participate were required to demonstrate that they possessed the necessary expertise by submitting examples of their work. Those that were approved to participate received a Program of Competition outlining the rules of the competition and the design program for the proposed capitol. This Program of Competition was to be signed by the architect, agreeing to the terms of the competition, and returned to the Commission. The architects were then free to submit their proposals for the new capitol.

These are the original building Plans (1912-1914) created by the capitol architect, Richard Kletting, for the construction of the Capitol Building. The series includes plans for framing, various construction details, columns and stone work, dome framing, foundation and footings, cross sections, and building elevations from various angles. The originals are blueprints, blueprints on linen, and tracings.